Three Down, More To Go

Fresh off the South Carolina primaries, and a landslide victory, Newt and his campaign move on to Florida.
South Carolina was the most impressive GOP primary/Caucus yet.
Iowa, it turns out, was taken by Rick Santorum. New Hampshire, Mitt Romney, and to much to our surprise Newt took the biggest victory yet. With taking nearly all 46 counties in SC, the victory for Gingrich was a decisive landslide of epic proportion.

In Newt's victory speech he took notice to all the candidates and gave the high marks for who they are and what they stand for.
Excerpts:


You know, Rick Santorum showed enormous courage in Iowa when he had no money, nobody covered him, and he just kept campaigning. I mean here's a guy who articulates the values of social conservatism, who articulates the importance of manufacturing and who may have been as right about the dangers of Iran as anybody in this country in the last 10 years.

Dr. Ron Paul who on the issue of money and the Federal Reserve, has been right for 25 years. While I disagree with him on many other things, there's no doubt that a lot of his critique of inflation, if fiat money and of the Federal Reserve is in fact absolutely the right direction.  And it's something I support strongly.

Finally, Governor Romney with whom I disagree on many issues, is nonetheless, a good example of America.  He's hardworking.  He has been very successful.  He has organized large systems.  He did a terrific job at the winter Olympics.

I give high marks to Gingrich for making these statements. It shows, he has no hard feelings and respect the rest of the field.

Now, with that said, I understand why there is need to expose "genuine" records of other candidates background. However NOT personal matters, like the ones ABC decided to do 2 days before the South Carolina Primary. But in the end, Newt put both ABC and CNN in their place, and it made the difference.
But I think what was the lowest move yet. Yesterday, while the people of South Carolina were casting their votes, Mitt Romney came out with a low blow.


The Hill reports that Romney’s campaign sent a press release wishing Gingrich a “happy anniversary” for the House decision to reprimand him, which happened on January 21, 1997.
Headlined “Happy 15th Anniversary, Mr. Speaker,” the release said, “Fifteen years ago today, Newt Gingrich became the first House speaker in American history to be reprimanded by his colleagues.”
The Romney campaign told Fox News that they had planned to deliver an anniversary cake to Gingrich’s South Carolina headquarters to mark the occasion on Saturday. 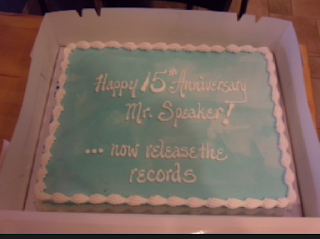 Whats the purpose of this?
The SC voters are already in the voting booths, casting their votes.
It can only be one thing. Mitt Romney is acting like a child.
It had no bearing on swaying people to Romney's campaign after the 11th hour.
It was a nasty way of trying to go after Newt.


In his concession speech, Romney congratulated the former House speaker but not without some underhanded jabs.


"When my opponents attack success and free enterprise they are not only attacking me, they are attacking every person who dreams of a better person. He's attacking you, I will support you I will help you have a better future"

But back in Dec 2011, Mitt was asked if Newt Gingrich “should give that Freddie Mac money back,” on Fox and Friends, Mitt Romney said he thought Gingrich should.

“I sure do,” Romney responded. “He was on a debate saying that politicians who took money from Freddie and Fannie should go to jail, which is outrageous in itself. But, look, he says he was in the consulting business.

Now I found Mitts comment to be hypocritical, to say the least. Newt, as a private citizen, was running a consulting business.
It's the same thing. Capitalism. But many forgot that, when chastising Newt for the Bain fiasco.

But now, it should all be water under the bridge, but not be forgotten.

In closing, Newt went after Obama in his victory speech, as he should, by this profound statement:

He (Obama) draws his from Saul Alinsky, radical left-wingers and people who don't like the classical America.

I think Newt's most excellent lambasting of the press put him over the top...

I think it did too. It needed to be said and there are not many out there would would put it the way he did.

FYI: latest Gallup poll shows Newt is closing the gap between himself and Obama in a general test sample.
Obama 50%
Newt 48%
Up my 4% in the last 5 days.

of course like your web-site but you have to check the spelling on several of your posts. Several of them are rife with spelling problems and I to find it very troublesome to inform the reality however I will certainly come back again.
Fat Daddio's 16 Inch x 4 Inch Non Stick Pullman Bread Pan