This is being reported on Politico, via Fox 5 in Atlanta. 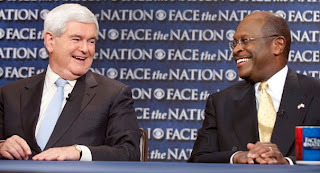 A top adviser to Herman Cain says the former presidential candidate plans to endorse one of his ex-rivals, most likely Newt Gingrich, this month in order to have an impact before the Iowa caucuses on Jan. 3.
“He wants to play ‘who to endorse’ for a while,” said the adviser, who spoke on condition of anonymity in order to speak bluntly. “Then he'll probably be endorsing somebody in a couple weeks — before the caucuses…. I'd say he's going to endorse Newt Gingrich,” the adviser said.

The adviser said Cain would like to play a role in the campaign, and in a Republican administration if his party wins the White House.
“He can go into the African-American community, and there's a lot of African Americans who like Herman Cain,” the adviser said. “I've seen him in churches — this guy can preach. And he can represent the successful black businessmen.”

A Cain endorsement would get heavy news coverage and would add to the momentum for Gingrich, who finished a clear first in separate polls of Iowa primary voters released this weekend by the Des Moines Register and NBC/Marist.