Barbara Boxer Off Her Rocker 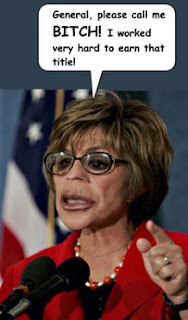 Sen. Barbara Boxer warned Tuesday that more than 8,000 people will die every year if Congress passes the Republican-backed payroll tax cut bill -- because it includes a provision that would delay regulations on industrial boilers.


The payroll tax holiday bill passed the House yesterday evening on a 234-193 vote. But like clockwork, Senate Majority Leader Harry Reid declared it "dead" on arrival. (Reid has, I am sure, a 'Dead on Arrival' sign hanging over his Senate door).
If it doesn't pass, it will effect 160 million Americans by raising the tax rate back to 6.2%.

The Democrats have been after the Republicans for refusing to pass the middle class tax break extension because it had a provision with in the bill that the left put in it, that would inject a millionaire sur-tax.
But the Republicans worked in the lost of revenue to the social security trust by cutting other funds from the bloated Government payroll in replace of the sur-tax.
And the Republicans compromised, by passing the tax break extension for the middle class as the Democrat wanted.
The Reps sweeten the deal by adding the Keystone pipeline (which, by the way, the AFL-CIO wants this project started) with in the confines of the bill for Americas energy independence. But Reid and the President threaten the tax break bill by one of two means. That being “Dead on arrival” or as the Administration says “We'll veto it”.

So, where is the compromise from the Dems, the very same party who accused the Republicans for not compromising? And shouldn’t the Republicans now use this as their choice of weapons against the Dems for not backing a middle class tax break? (I THINK SO!)

Anyways, back to the subject.
Boxer's claim is extreme. VERY extreme.

Boxer, chairwoman of the Senate Committee on Environment and Public Works, lined up her sights on a provision in the bill that would slow the controversial boiler rule out of the Environmental Protection Agency.

"By stopping the clean boiler rule from going into effect, more than 8,000 people per year will die for every year that that rule is delayed," she said. "And yet the Republicans in the House have just done that in their payroll tax cut bill."

SO the bloviating Boxer claims that 8,000 will die each year because of a “rule”???

Really?
Not sure where Boxer gets her "figures" from but of course, like the stimulus bill, which the Dems claimed would save or create millions of jobs, Boxer might use the Census Bureau statistics to win her argument, by the fact 2.5 million people in the US die each year (for various reasons, of course)....
I can hear her now: "Oh My God, it's worse then we thought. 2.5 million Americans died because of the lack of the boiler rule".....

So Boxer and the Democrats want to kill the House passed bill, a bill that will effect 160M Americans all over MAYBE saving 8,000?
Posted by Unknown at 6:52 PM

Silver, that’s being generous, you know. :)