From Welfare to Millionaire

This story is a true American success story.
This young lady pulled herself up by the boot straps and made something of her life.

She made the decision that she didn't need to stay on the Government dole anymore.

She woke up and found the American entrepreneur inside her and went for the brass ring.

THIS is the reason America is the land of opportunity, and not by occupying Wall Street and demanding a better life from others.


This is how each and every one of us can find prosperity. Alls you need to do is have the will to seek it and not by government engineering it. 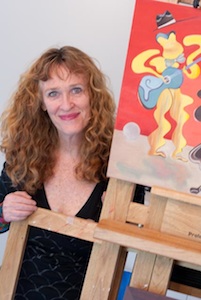 Trisha Waldron was 28 years old when she realized that the life she had drifted into was a dead end. She had gone from being a daughter to a wife to having her first baby at 22. Now single and barely surviving on food stamps in the Black Hills of South Dakota, she had no college degree, no work experience to speak of, and no clear idea of what to do with the rest of her life. She owned a tiny two-bedroom house from her divorce, and she had her two lovely little girls, ages four and six, but that was about it.

You can create your own life


One afternoon, volunteering at her daughters’ school, she heard a teacher tell the kids, “You can create your own life.” That sentence changed everything. As she puts it, “I knew I had to take responsibility for my own life. I had been running it according to others and things hadn’t worked out very well.”


She applied for a student loan and went back to school. The first year, she and her girls lived on welfare, food stamps, and odd jobs, but the second year, an opportunity presented itself and she grabbed it. An artist friend offered her a job assembling jewelry for a mail order catalogue in her spare time. She knew it wouldn’t be easy: she’d be in school all day, taking care of the kids in the evening, and then have to work late into the night at her kitchen table, but she’d be working for herself and be able to get off welfare.


Having a job and being in school built up Trisha’s confidence and she eventually proposed to the owner of the catalogue that she design his entire line of jewelry. She says, “As an entrepreneur you are always going to be confronted by things you don’t know, but you can’t let it stop you.” She went to the library and dove into teaching herself the basics of jewelry design as well as exploring Native American motifs from which she would draw inspiration. She recalls that she didn’t get a lot of sleep in those days.


Her business moved from the kitchen table to the garage where she installed a wood stove to keep it warm against the bitter South Dakota weather. Still, she had to work in gloves and a heavy coat during the winter. After two years, she decided she was ready for an even greater challenge and, in 1985, incorporated her own company.


From the beginning, Trisha was as excited by the cultures that informed her jewelry designs as she was by the final product. She learned the world was a whole lot bigger than Rapid City, South Dakota. She forged relationships with bead and stone vendors from Africa, India, and China.


Looking back, she says those relationships and the ones she developed with her staff made all the difference for the long-term success of her business. She explains, “At first, I had a super aggressive, take-no-prisoners approach. I might have gained something for myself but I wasn’t very nice to those around me. Eventually, I learned that you draw power as a woman in business by being compassionate and inclusive. This way, you can make long and loyal relationships.”


After only five years in business, she had made her first million. But, as Trisha remembers, “Getting there was incredibly challenging, I learned by trial and error, I cried a lot. But I lived simply and didn’t need much to survive. I was in a small town and hired my girlfriends to help me. My neighbors pitched in with the kids. My big break came in 1987 when the catalogue of the Smithsonian Institution started featuring my work.”


Helping others to help themselves


After winning the Smithsonian as a client, Trisha was able to move out of the garage into a proper jewelry studio. Other catalogues, such as the Museum of Fine Arts in Boston, started picking up the line. When things got busy, she would hire as many as 40 other women, mostly single moms, to fabricate her designs out of their homes--just as she had when she first started.


In 2006, after over 20 years in business, Trisha sold her company to an employee and retired to California with her second husband.


Trisha’s advice for people who want to start their own businesses:


• Your responsibility is to be clear about your vision. Then you can ask others to help.


• There is a lot of assistance out there for entrepreneurs if you look for it: I learned bookkeeping from a volunteer group of retired accountants.


• Surround yourself with people who support you. A lot of people said I was crazy to start my own business as a single mom. But I had a few people who believed in me.


• Be okay with the knowledge that you won’t know how to do everything right away and trust that you can learn.


• Create a “mastermind group” – 2 or 3 people who are willing to have you bounce ideas off them every few weeks. I kept my group going for 10 years.


• Realize it will be hard, and accept that.

Trisha had the good fortune to start her business 20 years ago, when entrepreneurship was not only encouraged, it was rewarded. Sadly it's becoming more and more difficult to bring an idea to fruition. I applaud her and hope others will take heart from her story - it CAN be done today but you have to REALLY want it no matter what.

Yep very true, Firebird. If we look to the past and are reminded of these kinds of things, everyone and anyone can get off the government teet.