Paul Krugman Spews His Contempt for the Politically Right...Again!

You may remember this douche bag from the Rep. Gabrielle Gifford shooting of January 8, 2011, where Krugman couldn't wait to libel the politically innocent:

"We don’t have proof yet that this was political, but the odds are that it was. She’s been the target of violence before. And for those wondering why a Blue Dog Democrat, the kind Republicans might be able to work with, might be a target, the answer is that she’s a Democrat who survived what was otherwise a GOP sweep in Arizona, precisely because the Republicans nominated a Tea Party activist". 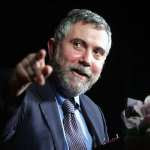 Now, this past Sunday, when Americans were mourning the nearly 3000 people murdered at the hands of Islamics in the name of their Allah, Krugman sends out his tirade of hate for the Politically Right by trying to claim that Rudy Giuliani and George W. Bush profited from being 'fake hero's' during the attacks of 9/11.

"What happened after 9/11 — and I think even people on the right know this, whether they admit it or not — was deeply shameful. The atrocity should have been a unifying event, but instead it became a wedge issue. Fake heroes like Bernie Kerik, Rudy Giuliani, and, yes, George W. Bush raced to cash in on the horror. And then the attack was used to justify an unrelated war the neocons wanted to fight, for all the wrong reasons.

A lot of other people behaved badly. How many of our professional pundits — people who should have understood very well what was happening — took the easy way out, turning a blind eye to the corruption and lending their support to the hijacking of the atrocity?

The memory of 9/11 has been irrevocably poisoned; it has become an occasion for shame. And in its heart, the nation knows it""""".

I’m not going to allow comments on this post, for obvious reasons"".
What Krugman seems to have lost, like so many other Americans had, is that the events of 9/11/2001 was a 'unifying event'. So why was it not continuous for some Americans? It would seem that politics and hate crept into the years that had passed, very much like Paul Krugman's blog frequently does.

My question is: What did Paul Krugman do on 9/11/2001? Did he run down to the Twin Towers to try and save people? Did he run to the hospital to try and comfort the injured? Did he sit with the relatives of the dead and try to help them with their grief?

Not likely. Why would a liberal hack like Krugman lift a finger to help mankind when it's easier to sit on his rear and libel people that you don't agree with.
Posted by AdamsPatriot at 4:02 PM

Seems like Paul just hijacked the 10th anniversary remembrance on the NYTimes by authoring this blog post. He choose not to remember the victims, nor their families, nor America’s pain. He choose to issue his own politically charged Op-Ed to suit his OWN desires.
That’s “hijacking the atrocity”

Why do I have this vision that Paul Krudman is looking in the mirror as he typed ‘9/11 has been irrevocably poisoned.. an occasion for shame’?

And, to me, that last sentence was an admission they he knew full well this would upset the nation as we reflected and mourned the events of 10 years ago and was in no mood to take an ass ripping for it.

He is a shallow man, who doesn’t want to hear any backlash against his own words.

"The atrocity should have been a unifying event, but instead it became a wedge issue."

It was unified, until the left went bat sh*t on Bush... for something that got full US Government approval for, to go in to Iraq.

What's the famous saying? Can't Fix Stupid! I wish they would realize that in doing this he's just rallying the Islamic Terrorists. Idiot!
I wrote about these morans at Spreadeaglepatriot.
Thanks for the great post.

The worse part is most liberals agree with his anti-American rants.

The beady-eyed bearded bastard strikes again. That putrid troll closed comments on that stinking blog post because, like all leftists, his comments are indefensible.

Mark, thnaks for the comments. Yes, it wouild have been a unifying evenmt had his choice been in the WH. Bush and Guiliani did made the best of 9/11 FOR AMERICA and AMERICANS, to help them through and work and survive a horrific terror event.

Politicizing this event by Krugman for his own selfish interests makes him a non-patriot.

Chris, how true! AND how soon they forget that it was their neighbors and friend that where murdered.
But as liberals do, they would rather parole the murderer, rehab them, and stick them back out into society...where they will do the same thing all over again. If these terrorists lived, liberals would treat them the same way.

spreadeaglepatriot, thanks for the compliment. And yes, libs just don't get it!

Sliver, cowardly as an individual, yet act (faux)brave when in groups!
If Krugman had an ounce of decency, he wouldn't have written this.
Closing comments only shows Americans that he was cowering in his corner like the true coward that he is.

spreadeaglepatriot- Welcome. Like your blog! Added you to our roll. And thanks for adding us here at Defenders of Prosperity to yours!