AP... Associated Press, fact checked Obama's and Buffett's tax claim that they are using as an excuse to raise taxes on the top earners and corporation.

Can you say Smack Down? 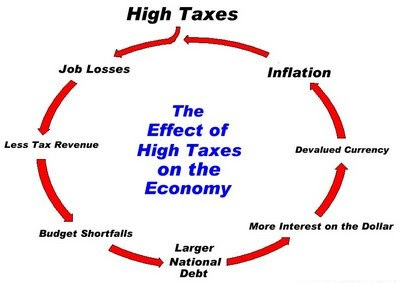 Excerpts from that article.

President Barack Obama says he wants to make sure millionaires are taxed at higher rates than their secretaries.
The data say they already are.


"Warren Buffett's secretary shouldn't pay a higher tax rate than Warren Buffett. There is no justification for it," Obama said as he announced his deficit-reduction plan this week. "It is wrong that in the United States of America, a teacher or a nurse or a construction worker who earns $50,000 should pay higher tax rates than somebody pulling in $50 million."


(And now what I have been saying all along)


On average, the wealthiest people in America pay a lot more taxes than the middle class or the poor, according to private and government data. They pay at a higher rate, and as a group, they contribute a much larger share of the overall taxes collected by the federal government.
The 10 percent of households with the highest incomes pay more than half of all federal taxes. They pay more than 70 percent of federal income taxes, according to the Congressional Budget Office.


Now I am sure most of you who frequent this blog already knew this.
You're all to smart and figured this out the moment Buffett and Obama opened their yappers on this bogus, BS, political banter excuse to of wealth distribution.

They could take every penny earned by the top 10% earners and it wouldn't even cut the deficit in half. At some point we will all pay this tax one way of another. All those idiot UAW workers at the Big Three will have smaller profit sharing thanks to the Democratic Party. But they wont see it coming. Idiots!

President Barack Obama says he wants to make sure millionaires are taxed at higher rates than their secretaries.

well THEY ARE! He's obfuscating the facts - equating dividend/investment returns with a paycheck. If Obama's lips are moving, he's lying!

Firebird is correct. Comparing a paycheck to dividends on investments is apples and oranges, but what are facts to the Obamacrats?

Or Chris, the unions might get a waiver from this president. Maybe by executive order. SAD!

Firebird, when I heard Buffett make this claim, my thoughts were, ‘in one ear and out the other’. But then our "intelligent" leader (snicker) pipes up and names this rule after Buffett and thought to myself, again, in one ear and out the other… because there is nothing between those ears of Obama. He and his advisors didn't take the time to figure it out that the President just might get it wrong... again.

Silver, I for one am pretty sure Buffett doesn’t do his own taxes and he really had no idea what he was talking about, just like Obama. Us regular folks who do our own taxes (and I am no CPA) figured that one out right after it was said.
I mean really, did they THINK we wouldn't be paying attention?

Saw a thing yesterday about America's richest - seems Buffett's the only one of those at the top who lost money last year, to the tune of $6 BILLION - I think he's turning into the late Sen. Robert Byrd - soon he'll be talking about his little dog Billy and his staff are gonna have to keep him away from the microphone.