The UN and its World Agenda 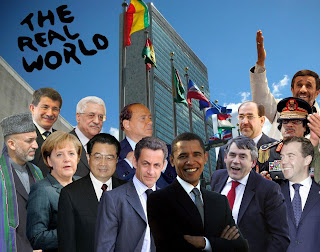 Secretary General Ban ki-Moon and almost 60 of his top lieutenants of the entire U.N. system, spent the Labor Day weekend at a remote Austrian Alpine retreat, discussing ways to put their sprawling organization in charge of the world’s agenda.


Their position papers for the meeting was obtained by Fox News, which include the following:

-- how to restore “climate change” as a top global priority after the fiasco of last year’s Copenhagen summit;
-- how to continue to try to make global redistribution of wealth the real basis of that climate agenda, and widen the discussion further to encompass the idea of “global public goods”;
-- how to keep growing U.N. peacekeeping efforts into missions involved in the police, courts, legal systems and other aspects of strife-torn countries;
-- how to capitalize on the global tide of migrants from poor nations to rich ones, to encompass a new “international migration governance framework”;
-- how to make “clever” use of new technologies to deepen direct ties with what the U.N. calls “civil society,” meaning novel ways to bypass its member nation states and deal directly with constituencies that support U.N. agendas.
This is also know as Global Governance.
The UN has lost it once reason for its root existence.
The UN was founded in 1945 after World War II to replace the League of Nations, to stop wars between countries, and to provide a platform for dialogue. It contains multiple subsidiary organizations to carry out its missions.
But now have ventured in to area such as Human Rights. And that's fine, when its a legitimate abuse.
But when the US State Dept files a human right report against one of our own states, based a false pretences, there is something very wrong with not only a US Administration who turns on one of it's own, but a UN that would except it as legitimate.
The United states funds 22% of the UN operating budget of $4.19 Billion every 2 years. Taxpayers pay nearly $1 billion every 2 years.
We are investing $1B in to an organization who will be investigating Arizona for Human rights violation, on top of globally restructuring wealth... There seems to be something VERY wrong here, and we must not sit ideally by and watch our country to get sucked in to Global Socialism.
It's time to ask the UN to leave the soil of the United States and/or disband.
Posted by Unknown at 11:20 PM