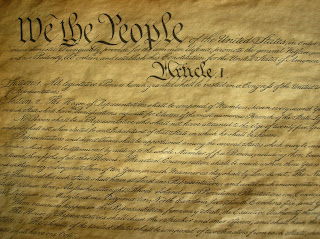 It is a document to guide the Government of what it can, and cannot do and that we the people have, outside of those government guidelines set fourth by this document , the freedom to do as we see fit, as long as it doesn't violate the laws that are adhered to the Articles and Amendments of the US Constitution.

My personal favorites articles and Amendments are:


The privilege of the Writ of Habeas Corpus shall not be suspended, unless when in Cases of Rebellion or Invasion the public Safety may require it.


No Bill of Attainder or ex post facto Law shall be passed. No Tax or Duty shall be laid on Articles exported from any State. No Preference shall be given by any Regulation of Commerce or Revenue to the Ports of one State over those of another: nor shall Vessels bound to, or from, one State, be obliged to enter, clear, or pay Duties in another.


Full Faith and Credit shall be given in each State to the public Acts, Records, and judicial Proceedings of every other State. And the Congress may by general Laws prescribe the Manner in which such Acts, Records and Proceedings shall be proved, and the Effect thereof.


The Citizens of each State shall be entitled to all Privileges and Immunities of Citizens in the several States.


The United States shall guarantee to every State in this Union a Republican Form of Government, and shall protect each of them against Invasion; and on Application of the Legislature, or of the Executive (when the Legislature cannot be convened) against domestic Violence.


Congress shall make no law respecting an establishment of religion, or prohibiting the free exercise thereof; or abridging the freedom of speech, or of the press; or the right of the people peaceably to assemble, and to petition the Government for a redress of grievances.


A well regulated Militia, being necessary to the security of a free State, the right of the people to keep and bear Arms, shall not be infringed.


The right of the people to be secure in their persons, houses, papers, and effects, against unreasonable searches and seizures, shall not be violated, and no Warrants shall issue, but upon probable cause, supported by Oath or affirmation, and particularly describing the place to be searched, and the persons or things to be seized.


The powers not delegated to the United States by the Constitution, nor prohibited by it to the States, are reserved to the States respectively, or to the people.


-Amendment 22: (We need to extend this to congress, also)

What is your favorite?


Side note:
Nothing on the Whitehouse website about celebrating the US Constitution Day....

Of course they don't, Chris, they are liberal atheist, who try and re-write both the bible and the US constitution to, what they feel, is their true meaning.
The one thing that stands out the most with them is not only do they try to micro-manage the economy by heavy regulation, but micro dissect the US Constitution.
Sad that we have to waste the time with them having to debate a simple, easy to read and easy to understand document.

They are their own gods. It does amaze me how liberals think just becasuse it's in their head it must be true. They define everything and then wonder why nothing they define turnes out the way they said it would. Just look at what they said would happen when we got liberal Democrats making liberal policies in our government.