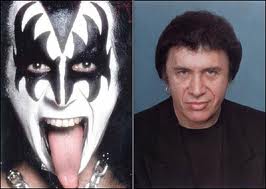 Rock legend Gene Simmons has been in the forefront of American rock hero's since the 1970's and as most musician go, you'd think he would be quite liberal minded.
Oh contraire
.
Reported on Fox News, Gene is, in his word, very conservative on most issues.

Gene Simmons has never been one to shy away from voicing his political opinions and the KISS frontman tells Pop Tarts he is anticipating some serious power shifts to take place as a result of the midterm elections in November.
"There is going to be major change. The American public is very, very angry. I believed in this administration, and I voted for President Obama, I also voted for President Clinton, and I also voted for President Bush,” Simmons said this week at the launch of Activision’s “Guitar Hero: Warriors of Rock” in Los Angeles. “I will vote my conscience, and I'll be damned if anybody is going to point a finger at me and say ‘vote along party lines.’ America is like me – sometimes they vote this way, sometimes they vote that way."
But when it comes to certain issues, Simmons isn’t afraid to admit his allegiances aren’t exactly in keeping with Hollywood’s stereotypes.
“I am fiscally and in terms of foreign policy, very conservative. Like everybody, we want to pay less taxes not more,” he continued.
And on that note, Simmons is taking the Tea Party movement very seriously.
“You have to take any movement that expresses the will of the public seriously. You can't point to any direction and say ‘this is nonsense’ because the people who are involved in any movement, are doing it because they believe,” he explained. “Who am I to say that what they're doing is right or wrong? At the end of the day, no matter what anyone believes in, no matter what side of the aisle you’re on, you have the opportunity to vote, and express your feelings.”
Posted by Unknown at 8:52 PM

Of course, Joe goes off topic. BUT, with that said... He did vote for Obama and Clinton....

Your political kind is disgusting.

Off-topic when is it off topic to question the validity of a writer and his opinions? What world do you live in?

You present a piece by Gene Simmons, Whose stupidity towards actual values is well-known and think what? that his narrative is worthwhile and has some redeeming quality? It doesn't. He's a DB and we all are aware of it. And his status as rockstar doesn't lend any further credibility to anything he writes.

So in review i wasn't off-topic to question the legitimacy of him being taken serious.

Just how do you get that Mark is in support of Simmons values or life style?

I do not care for Simmons nor for KISS, but the message here is the this 'stupid' 'DB' 'Washed up former rock star' is smarter than the average liberal, like you and Obama, to "recognize" that the current regime in Washington, DC is killing America, and he believes American's are going to change the situation there in Nov.

Now, perhaps, Simmons has recovered from whatever poor judgement he has made in the past to come up with his opinion, but Omaba certainly hasn't recovered from his 'admitted' cocaine use and is delirious to think that this country wants what he is shoving down American's throats (or up their noses as the case may be)!

What world do you live in??? A world when Simmons claims that wasn't him in the video and yet,(that I have ever seen) has never been proven.
Second I said "on most issues". You know the topic of his quote "fiscally and in terms of foreign policy, very conservative. Like everybody, we want to pay less taxes not more"
Where in this post does it say anything about "moral" issues?
When the left sees something like what Simmons has said, they immediately turn to un-proven, un-quoted claims of morality.

As Adams Patriot have said the left have done things wrong too. Would you then have to ascertain they are human and make mistakes?
And THAT is not being left, nor right. Equals off topic.
Last, but foremost- I quoted what Simmons said. However, you would have to say then, based on what he said, AND that since he voted for Obama, Clinton, Bush, that he is an 'Independent'

So to sum this all up, he has SOME conservative values "fiscally/foreign policy, very conservative. Like everybody, we want to pay less taxes not more"
And SOME liberal values "Obama - coke head.
Clinton - sex addict, Office of the Presidency disgracer, womanizer, adulterer."
LOL!