It is amazing how, just because Obama won re-election, the left is out there fluffing up their feathers, pounding their chest and carrying around their Hammer and Sickle, like a proud father of his newest son.

They believe they have won the Americans hearts, and that conservatives are dead in their tracks.

But the war is far from over between the Liberal Left and Conservative Right.

Over on Being Liberal Facebook page, they are touting this stat:

Yes, I have been hammering these jackwads!

Problem with the 109M, 1M and 20M stat is that it's not a stat about their facebook page.
It's a stat Facebook uses and compiles when someone uses the word "Liberal" on Facebook.
So those numbers are not a factor in this post.

What is a factor of this post is the first number from the "Being Liberal" page, the "Likes"
Nearly 600K.

Well a few days ago, I decided to do a little cut and paste venture of my own, and came up with some interesting numbers. Liberal vs Conservative, and here is what I found: 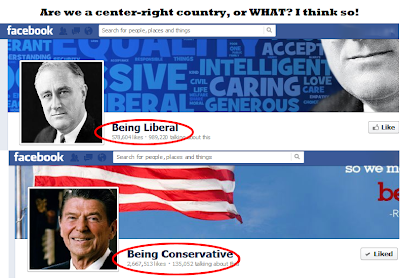 Seems there ARE more Conservatives on Facebook.
About 5 times as much......
Posted by Unknown at 2:04 PM

But related in regards to FB, I caught wind of news about Americans losing interest or abandoning it altogether which to this I can only applaud.

The ages involved are of particular interest,,,,,

I could careless about little Shane or LaTrisha gumming their very first piece of toast.

To those who post every event to and including when they will be on vacation, well there are many a criminal among-st your "friends" whether you believe it or not and they thank you for such timely notice.

I understand your point here, Christopher. I see FB as good in two ways. One being instantly connect to loved ones who are far away, as I am. My daughters are in the next state over to me, and I miss them, but I can see what they are up to and whats going on in their lives. My brother and his family are in another state, but we are connected thru this medium and it's second to being right there with them.

I have relatives on the other side of the world, but I am instantly connected to them.
Two, I am connected to like minded people from around the country and the world, for which I mostly would never meet.
I get a lot of valuable material and info that I would otherwise not see, too.


The negative of FB is it can divide people you know who don't agree with your point of view. And being that it's written words, rather then spoken, people have a tendency to view your point of view, or opposing view, as being hostel towards them. They take it personal, instead of just communicating back and forth to see if you can find common ground.


Yes there are people who are obsessive in the posting. It does drive me nuts, sometimes, but I have learned to just move pass those things and continue to connect with others.
I use it everyday, mostly for reading links on posts, but also to connect with my whole family.

I see your point as well Mark, but I guess I am old fashioned (to a point) as the phone (also new to texting here) and email serves just the purposes you speak of without all the extra baggage that comes with FB.


I also find my email inbox free of requests for anything related to fictional cafe's, farms or anything else not related to reality,,,,just saying.