It's All Their Fault

And now that the sequester is here upon us, the doom and gloom from the Whitehouse is at a fevered pitch, for which the hyperbole begins.

The Whitehouse and House Republican failed to come up with a compromise.
So what else is new?

President Obama placed blame squarely on Republican lawmakers at a Friday press conference for failing to stop automatic spending cuts that were to begin kicking in later in the day, calling the cuts "dumb, arbitrary."
Problem with O'Blamo line of thinking is;
The president said the impact of the cuts won't immediately be felt, but middle class families will begin to "have their lives disrupted in significant ways." He said that as long as the cuts stay in effect, Americans will know that the economy could have been better had they been averted.
Problem with O'Blamo line of thinking is;

Highlights (if you want to call them that) of Obamas banter:
"The pain, though, will be real, Let's be clear, none of this is necessary It's happening because of a choice that Republicans in Congress have made."
In his own words, again, they are "dumb, arbitrary" 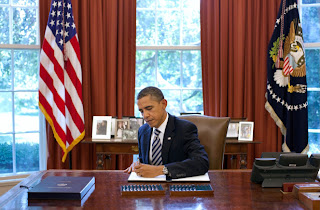 President Barack Obama signs the Budget Control Act of 2011 in the Oval Office, Aug. 2, 2011
And of course, the MSM jumps in on Obama misleading talking points, (corrected link) all to scare the American people.
Some points here from the linked ABC article that must be corrected:
False: It will be $44B over the next 10 months
False: It is up to each dept head to find whatever cuts they deem necessary to reduce their growth, by 2.4%
False: The law requires agency heads to cut the same percentage as everyone else is, from EACH dept budget, at their discretion.
True, as I stated above!!!
Partly true, only the House has passed two bills to avoid this and the Senate did nothing. The President has not been in Washington because he has been busy playing golf with Tiger Woods.

And running around the country giving speeches.