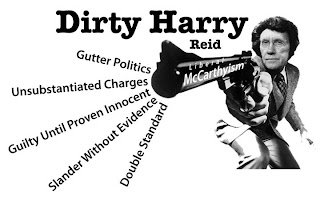 As you all must know by now, Harry 'Ass' Reid has taken the reins for Obama to drive home the Romney Tax Return narrative that Dems have been pushing for , for some time now.

Romney, earlier this year released 2010 tax and return and within the last few months have release his 2011 returns.

I guess thats not good enough for the Progresssives.

SO to force Romney to comply, Reid is making the unsubstantiated claim that (according to a Bain associate) Romney hasn't paid taxes in 10 years.

This is a claim, with no named sourced, that is becoming more and more obvious, to be bogus.
Case in point.
Nanny (moonbat) Pelosi has jumped in to the fray, by this statement alone:


“Harry Reid made a statement that is true. Somebody told him. It is a fact. Whether he did or not can easily be disposed of: Mitt Romney can release his tax returns and show whether he paid taxes.”

"Whether he did or not"
(Screeching sound of car brakes)
Hold the fort. Pump the brakes a little bit.
"It is a Fact" "A Statement that is true"
OK, what is it, Moonbat?

David Axelrod made this statement yesterday:


"Governor Romney can resolve this in 10 seconds. They can release the tax returns"

With all that said, there is this to be said.
Harry Reid has NO one who has informed him about Romney's tax return. Or nothing about his tax return.
If so, such person would be in violation of federal law.
Individual income tax returns — including those of public figures — are private information, protected by law from unauthorized disclosure. Indeed, the Internal Revenue Service is barred from releasing any taxpayer information whatsoever, except to authorized agencies.

According to the Office of Treasury inspector Generals office:

26 U.S.C. § 7213 makes it a felony for a current or former Federal government employee, or a contractor providing tax administration services under § 6103(n), willfully to disclose tax returns or tax return information in a manner not authorized by Title 26.
AND US Code:
26 U.S.C. § 7431(a)(1) permits a taxpayer to bring a civil action for damages against the United States if a Federal employee knowingly, or by reason of negligence, inspects or discloses that taxpayer’s return or return information in violation of 26 U.S.C. § 6103.


This section contains the definitions of the following terms:


290.4.1   Unauthorized Disclosure.   A disclosure occurs when a return or return information is made known to any person in any manner whatever.  See 26 U.S.C.

Harry Reid has either violated Federal law, OR.