U.S. Sen. Dick Durbin, D-Ill., in an attempt to address what he claims is an increase in anti-Muslim bigotry, is relying on questionable statistics and a witness with a record of opposing virtually all law enforcement attempts to deal with Islamist-inspired terrorism.

In a statement, Durbin said his hearing Tuesday on the state of Muslim civil rights in America comes "in response to a spike in anti-Muslim bigotry in the last year including Quran burnings, restrictions on mosque construction, hate crimes, hate speech, and other forms of discrimination."

While hate crime data for 2010 has not been released yet, FBI reports in the recent past have shown no spike in anti-Muslim attacks. Those statistics show 107 anti-Islamic incidents reported in 2009, compared to 156 anti-Muslim crimes in 2006. In both reports, race related crimes dominated, and religiously-targeted attacks involved Jews as victims about nine times more often than Muslims in 2009 and more than five times more in 2006.
After making critical statements about the organization, the three-term senator has coddled the Council on American-Islamic Relations (CAIR), and visited a Chicago-area mosque whose leaders have been cited in federal court records as part of support front groups for Hamas, the U.S.-designated Islamic terrorist group that leads the government in Gaza. 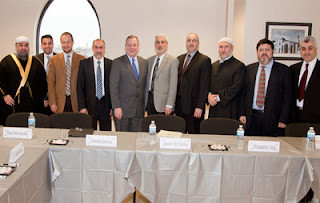 
Last week, Durbin wrote a letter that hailed CAIR's Chicago chapter, saying it "advances a greater understanding of the Muslim culture and serves as an essential thread in the multicultural fabric of our nation. Your efforts to advocate for tolerance promote the civil liberties of all communities."

Last April, he wrote a similar letter to coincide with the group's annual fundraising banquet. "CAIR-Chicago's efforts to ensure justice and equality demonstrate that working for greater civil liberties of one community advances the civil liberties of all communities," Durban wrote. "Your organization promotes a greater understanding of the Muslim culture and serves as an essential threat in the multicultural fabric of our nation."

That support marks a striking turnaround for Durbin. In 2003, Durbin expressed serious concerns about CAIR, "which apparently from what I have read is unusual in its extreme rhetoric and its association with groups that are suspect, there are many mainstream groups of Muslim Americans who fully support this war against terrorism and I would hope that they would be invited to speak to their heartfelt beliefs about this effort so that our characterization is fair across the board."

Since then, evidence linking CAIR and its founders to a Hamas-support network has been released through court action. That evidence prompted the FBI to cut off its outreach with the group. Last year, the DOJ said it had seen no new evidence that exonerates CAIR from the allegations that it provides financial support to designated terrorist organizations.
But Durbin continues to be supportive of this shady group.

So what’s Durbin angle on this?
Are some in the government, like Durbin, preparing for the destruction of Israel?
Or is Durbin looking for trouble with Federal authorities?
Posted by Unknown at 2:09 PM

The Liberals hate the Jews. They would have made great Nazi's back in the day. I've never met a liberal that like Jews.

And funny, Chris, many are, or support, liberal Democrats.
And for Durbin to be meeting with known Hamas supporters is very disturbing to say the least.

Mark,
I loved the piece. Great work. I can't wait for the piece on Peter King R-MY. You know Pete, Islamphobe and current Republican congressman who endorsed the IRA and was involved with groups that smuggled guns into northern Ireland. He wouldn't even denounce the IRA when they killed British police officers during mortar attacks.

I like how he went to trials in Ireland and Britian of IRA members to support them. Imagine that a US Congressman supporting terrorists at their trial. And it wasn't even a Democrat. lol..

Chris, do you know any liberals who disliked Jews? I mean personally. I don't. Maybe i don't hang out in the Jew hating liberal circles that you do. I've only known two anti-Semites and they were republicans who disliked African Americans, but thats it.

So how is it you travel through such large enclave's of Jew hating liberalism? That might be an interesting story.

There you go Joe, taking it off topic.

And Joe, I think Chris was referring to Israelis, you know the Jewish state.

You can see that showing up in pictures with a group like Cair, which as an overall group doesn't support Hamas is different than supporting Sinn Fein and IRA members itself right?

Your off topic comment shows a diversion from Durbin, the topic of the post. It's typical of the left to avoid the subject by bring up another subject to avoid debate they can't defend.
The picture is nice for you to look at to make you debate. However the words of the post is the key to the connection.
Try reading and not just looking at the pictures.

Yes Joe I dis know a lot of liberal Jews haters. I used to work for UAW and i heard a lot of Jew bashing there. Have you listened to how the left-wing bash the Jews Joe? Why is it the left-wing can't support Israel and bash Jews Joe? Or do you choose to pick and choose what you hear your ilk saying about Israel?

Joe do you dislike the Jews? Do you support Israel?

Authorities intercepted a parcel this morning addressed to Rep. Peter King (R-N.Y.) containing a bloody pig’s foot and a derogatory message, a source has confirmed to CBS News.

The parcel was intercepted at the Congressional mail facility in Landover, Maryland, where mail sent to lawmakers is screened for security risks.

The U.S. Capitol Police and U.S. Postal Service confirmed that there is an open investigation, though would not confirm the details of what was contained in the parcel because the investigation is ongoing. King’s office, which did not see the parcel, referred all questions to the Capitol Police.

According to the Postal Service, a hazardous materials response team tested the parcel and found it to be non-hazardous.

NBC adds that the note’s “derogatory message” was in fact of an anti-Semitic nature (Rep. King himself is Catholic).

A Capitol Hill source tells NBC that the Washington D.C. office of Rep. Peter King (R-N.Y.) was sent a bloody pig’s foot with a note attached that contained anti-Semitic ramblings.

Interesting, Anon. Thanks for the info. By any chance do you have a link to the story?

I wonder if the parcel was sent by a liberal or a union brother!

Thanks admin
you have good post and nice blog
and i want to visit and subscribe to my blog Articles2Day.Org and The Market
thanks a gain admin ,,,