In a reveling investigation of "Project Gunrunner", a program that was suppose to cut off the flow of drugs crossing our southwestern board and to stem the flow of firearms into Mexico and with it an attempt to deprive the Mexican drug cartels of weapons by the U.S. Bureau of Alcohol, Tobacco, Firearms and Explosives (ATF), is turning out to be another debacle of the ATF.

With an effort to prop up and justify its collaboration with other US agencies and the Government of Mexico to expand the eTrace firearm tracing software system, the program backfire on the ATF in 2010, when then Customs and Border Protection Agent Brian Terry was murdered. ATF allegedly permitted and facilitating numbers of 'straw purchases' of firearm sales to traffickers, to nail these smugglers and gather intel through gun shop owners/operators working in cooperation with the ATF program. 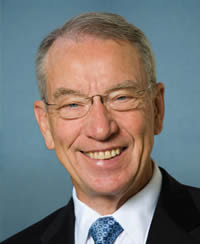 Senator Charles E. Grassley (IA) began an investigation with a letter to ATF on January 27 2011 and again on January 31 2011. In the responds from ATF, through the Department of Justice denyed all allegations.
Senator Grassley responded with specific documentation supporting the allegations in letters to U.S. Attorney General Holder on Feb 9 2011 and Feb 16 2011. ATF refused to answer specific questions in a formal briefing to Senator Grassley.

Indictments filed in federal court, documentation obtained by Senator Grassley, and statements of ATF agents obtained by Senator Grassley and CBS News, show that the ATF Phoenix Field Division allegedly allowed and facilitated the sale of over 2,500 firearms (AK-47 rifles, FN 5.7mm pistols, AK-47 pistols, and .50 caliber rifles) in 'straw man purchases' likely destined for Mexico.
According to some ATF agents, Mexican officials were not notified, and ATF agents operating in Mexico were instructed not to alert Mexican authorities about the operation.
Some ATF agents and supervisors strongly objected, and gun dealers, with in cooperating with ATF, protested the sales, but were asked by ATF to complete the transactions in order to elucidate the supply chain and gather intelligence.

Moreover, there are acusations that the ATF was attempting to boost statistics to 'prove' that American guns are arming the Mexican drug cartels and to further budget and power objectives and to give reason to expand the US governments control of arms in America.

Many of these same guns have now been recovered throughout Mexico, which has artificially inflating ATF's eTrace statistics of U.S. origin guns seized in Mexico. One specific gun, recovered at the scene, is the weapon used to murder Agent Brian Terry
Posted by Unknown at 11:52 AM

Whoever the Obama Administration is protecting it surely can't be Americans or our allies.

And the ATF is pretty ignorant.
CBS did a good investigation on this. (see link)

Did it really need investigation? This administration is all about criminality and bringing in crime in order to assert control.

All CBS is doing is to bolster his false aura of being in control by "busting" this.

God, I so wish people would take the blinders off!

The story needs to be told, Christopher. It was a two fold story. One to show the inept of our government to protect the nation and two, how they are trying to justify gun control.
I do tend to agree with "CBS is doing is to bolster his false aura of being in control" in that sense.

Well, its certainly not good that the weapons were used to attack US citizens.

I used to love Mexico. I feel bad for the people of Mexico and the American land owners and citizens along the border. At some point in time those Americans on the Southern borders will give up the idea that our federal government can't protect them and they will need to do it themselves.

The federal government isn't protecting our borders. We need to put control of those borders in the hands of the citizens and local and State government.

Ranchers need to look to the Germans to protect their land and our country. It's their property and they have the right to protect it. German Shepards and Doberman Pinchers will protect the land from treaspassing. Once the word got out that it is dangerous to cross their they'd move. An invisable fence and some Beware of Dog signs is all they'll need.

I'm sure the left-wing will be on the wrong side of this but screw them. The left have screwed up our country enough and it's time to think of the safety of our citizens for a change. If the left-wing don't like it let them protest on the border with the dogs and the drug cartel and illegal immorgants. I'm sure it will be safe for them just like it is for those citizens that live there.