While We Were Not Looking 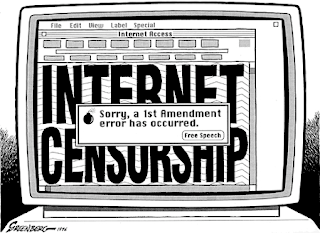 While we were all preparing to celebrate the birth of Christ and the 111th was busy igniting their scorched earth agenda, the FCC snuck one under the radar.
Most of us missed it... Not the new 112th.
Read on:


House Speaker John Boehner said that the Federal Communications Commission's December network neutrality decision is proof that the FCC "is creeping further into the free market" and could impede the freedom of speech, the Washington Times reports.
When the FCC rammed through net neutrality regulations last December, Chairman Julius Genachowski may have been hoping Americans would be too busy with their Christmas shopping to notice.


The Speaker’s view seems to be shared by Republican members of the House Energy and Commerce Communications and Technology Subcommittee, led by Rep. Greg Walden (R-Ore.).  That panel is set to vote tomorrow on a “resolution of disapproval” of the FCC’s regulations.

Rep. Walden previously succeeded in inserting an amendment into the Continuing Resolution that would bar the FCC from using funds appropriated to it to implement net neutrality.

The FCC has remained quiet regarding such moves, though net neutrality advocates such as the hard left group Free Press have critiqued them, as well as Boehner’s comments.  Tomorrow’s House Subcommittee vote will take place at 9:30 a.m., and the resolution is expected to pass.

This is what happens when you don't stay engaged to what is happening in Washington!
Posted by Unknown at 8:35 PM

These liberals are so frikin' stupid. They can't think past today. Do they think that this wont come back to haunt them some day? Maybe one day they will think through their stupid power plays and realize that they are going to get screwed just like we are. And when it happens to them they will blame the Republicans like they always do.

The FCC is so messed up. That ruling doesn't go near enough. We need to make sure that internet suppliers don't cut the American people off and make what should be available to all only available to the richest.

I'm sorry that protecting the freedom of information on a primarily government created system from Greedy corps is not in your world or political view but when you get priced out of what you want it will be.

What i can't understand about the right is that private enterprise has as many unintended consequences and as mu8ch corruption as government but you guys advocate more for it.

Take Music companies. For years they colluded with each other to keep CD prices artificially high. They ripped us off and made sure the only good aspect of the Free Market didn't exist, competition.