Doctors at the union rally yesterday in Madison Wisconsin where handing out Doctors excuses to union members, who called in sick to their government jobs so they could attend the rally.

The symptoms... "Walker Pneumonia"... which is not an illness, at all. 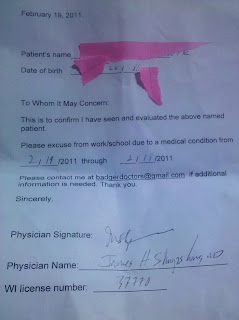 Those Doctors, writing out an excuse to public employee unions members who were at the rally yesterday WITHOUT an exam, where in fact committing fraud against the government.
And to top it off, any union member submitting known fraudulent documents to their employer (government or business), are just as guilt.

The license numbers are clearly written so all can be investigated and summarily prosecuted and this should be done immediately.

Everyone on the left was quick to charge Rush Limbaugh of "Doctor Shopping" which I believe was found untrue but a practice I believe all find repugnant (except those who do it).

This is the opposite making even worse than repugnant but rather beyond the pale when considering a doctor's Hippocratic oath of to do no harm. The harm being foisted upon the People of Wisconsin is inexcusable and those causing this harm are to be held responsible to and including incarceration.

There's nothing to say. This shouldn't be happening and i hope that those who decided to defraud the state get what they got coming to them.

I believe that puts them inline to be the Republican Governor of Florida next election cycle.

All joking aside they know better and whatever happens is what they brought on.

CP, I believed the Doctor shopping charges as that's what addicts do, especially one with money like Rush. They certainly don't go see the dope man in the bad side of town.

But he wasn't proven innocence. He made a deal with prosecutors to drop the charges if he stayed in treatment and defrayed the costs of the investigations. You don't pay $30,000 if your innocent. Just my feelin.

Joe, I brought up Rush to make a point about the reverse or better said the flip-side of the coin.

I could careless if Rush did it or not as the real issue would be the doctor that did it if it happened and clearly it is happening in WI.

Well, judging solely from first impressions it does appear that it is happening in Wisconsin. But perhaps its a setup or plant?

Given the last four attempts i have seen to use video evidence to convict someone in the court of public opinion i trust nothing without further evidence. I can't trust edited video's.

And given the dirty tricks played by Andrew in the past i need a truckload of salt when i listen to him.

Joe, the video was Andrews, the picture is from another source.

The left-wing always has their criminal element. Teachers are breaking the law and the Democrats are backing anti-democracy by not taking the vote. But they are happy that there hasn't been any violence yet. Low expectations? All this illegal activity will come down on these unionists. People are learning to hate these union thugs. Take the vote and teach or go to jail. The law is the law. And no matter how much the libs want "social justice" we are a country of equal justice. The violence will come when the unions realize they can't win this one.

Alright, Why is everyone here avoiding the issue?

All I see is blame this group, blame that group?

Can we not be adults and get back to the reality of economics?

Christopher, most of us have been talking about the economics loud and clear with those folks on the other side. However, they (most) are not listening and NOW are making threats.
This has gone from a budget debate to out and out threats.
I don't even want to think what comes next, my friend.

Guys it became about something other than economics and budgets the minute Gov Walker and the republican party attempted to remove collective bargaining rights. It became about destroying unions, not filling holes in budgets.

Here's what i have seen...
"Although union leaders and Wisconsin Democratic Senators are offering to accept the wage and benefit concessions Gov. Scott Walker is demanding, Republican Senate Majority Leader Scott Fitzgerald (R-Juneau) said today a bill taking away collective bargaining rights from public employees is not negotiable.
Democrats and union leaders said they're willing to agree to the parts of Walker's budget repair bill that would double their health insurance contributions and require them to contribute 5.8 percent of their salary to their pensions.
However, the union leaders want to keep their collective bargaining rights.
"I have been informed that all state and local public employees – including teachers - have agreed to the financial aspects of Governor
Walker's request," Sen. Jon Erpenbach (D-Waunakee)said. "This includes Walker's requested concessions on public employee health care and pension. In return they ask only that the provisions that deny their right to collectively bargain are removed. This will solve the budget challenge. This is a real opportunity for us to come together and resolve the issue and move on. It is incumbent upon Governor Walker to seriously consider and hopefully accept this offer as soon as possible."
However, Fitzgerald said the terms of the bill are not negotiable, and he called upon Democrats who left the state this week to stall a vote on the bill to return to the Capitol"

But i got a text that the bill has been pulled from the foor and sent to committee.

@ Joe,,,"Guys it became about something other than economics and budgets the minute Gov Walker and the republican party attempted to remove collective bargaining rights. It became about destroying unions, not filling holes in budgets"

That is at the crux of all of this, when one, repeat one, works for the government there can be no "collective bargaining" being we the tax payer have not given our say, hence the economic argument that will not cease.

I would have to agree with Christopher. Tax payer must have a say.
But this might all be for nought. I am hearing a hand full of Reps (with ties to unions) want to negotiate the CBR aspect of the bill.

I have seen videos of other DR.s offering excuse slips. This should be investigated and if found the these people are Dr.s and did offer to defraud the government they should be made an example of and procecuted.
They didn't have to get into this issue, it had nothing to do with the Dr.s or their oath to their profession.
And even if this had anything to do with Dr's, it was pure fraud on their behalf.

lets get back to reality.

Taxpayers have no more rights than any other shareholders. Sorry to rain on your non-constitutional opinions, but there is nothing in the constitution that gives taxpayers any special rights.

You all know that you live in a republic which doesn't give a lot of rights to pure democracy.

Joe, this isn't about taxpayer rights.
Walker campaigned on these issues and was voted in on his promises. The voters have spoken and expect him to carry out his campaign promises.
Those who didn't vote for him are trying to make him break those promises.
Tax payers are also 'the people' and have the same inalienable rights as the people.

Soon goivernment employees will have the right to not be in the union and still keep their jobs. Why is the government in the business of taking union dues from the employees and then pay the unions? Does that seem right to you Joe?

Mark, actually everything I've read has indicated that Walker did not discuss collective bargaining rights during the campaign or a plan for eliminating them.

And since that's the holdup not the concessions themselves i think he should compromise. Perhaps you can find where he campaigned on removing collective bargaining rights. I've tried and only found things saying he didn't.

And on the matter of "THE PEOPLE" aren't you quoting the Declaration,

We hold these truths to be self-evident, that all men are created equal, that they are endowed by their Creator with certain unalienable Rights,[72] that among these are Life, Liberty and the pursuit of Happiness."

What part contains referendum on contracts?

Joe, I am sighting the constitution AND the declaration... And collective bargaining is NOT a contract. It's haggling over a contract.

He campaigned on getting Wisconsin fiscal house in order and KEEPING it in order. Eliminating collective bargaining keeps the government in control of it's fiscal well being and NOT in the hand of Unions.