Massive Protesters on the Ground in Wisconsin 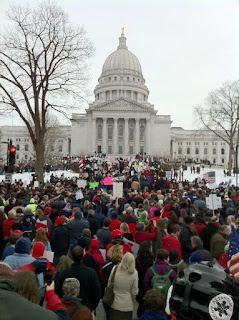 Pro-Unions are in full force in Wisconsin Capital as we speak.
But a latest development, massive Pro-Walker, including the Wisconsin Tea Party patriots are counter-protesting, also. It's heating up in Madison, and not because of the weather, either.

Jim Hoft, from Gateway Pundit is on the ground in Madison, WI covering the events.

Union organizers are pleading with the union members not to confront Pro-Walker supporters and has Hoft is saying.


Thousands of people are at the capitol today.  Impossible to tell who the friendlies are right now.
The unions are out in force!  The Barack Obama organizers are waiting for us.  I can hear the crowd from blocks away.
Thousands of Walker’s supporters.  Massive crowd. Chanting “Go Scott Go!” and“Pass The Bill!”
Inside the Capitol Building the pro-union groups are chanting.  It’s deafening. I had to go to a back room to phone in this update.
The Wisconsin Republicans are standing firm. Wisconsin Senate GOP Majority Leader Scott Fitzgerald: Bill limiting collective bargaining not negotiable, will pass as is.
THOUSANDS of Tea Partiers are rallying on the capitol grounds. The union supporters are marching around the capitol grounds in a circle on the street. The union supporters do not have a permit to be on the capitol grounds. They haven’t had one all week! The police are keeping the two groups apart.
Good to see the TPP and Conservatives getting out and not just letting the socialist have the stage.
I can't be there, but am in spirit!
Posted by Unknown at 1:13 PM

I still see no need for eliminating or limiting collective bargaining in any of the states. Perhaps other than the dislike and distrust of unions why that right would need to be eliminated. I can agree with the need for cuts and increasing their share of medical costs, but why eliminate their rights?

What type of American wants to limit rights of workers?

Why would the Tea Party which stands up for 1st and 2nd amendment rights want to eliminate rights for others including conservatives?

again i can see asking for cuts. I have no problem with that, but the rest is uncalled for.

I think what they are trying to do is prevent work stoppage/strikes. Especially among the teacher unions.
I think, though, this might be something the Republicans and Governor would be willing to drop.
But they can't drop it without the Dems return.

Glad to see you're good with asking for cuts.
The TPP are for Constitutional rights, not rights granted by law to only a certain sector of the population.
All or none.

Mark, collective bargaining rights should exist for all, but the right has done a good job of convincing people they don't need em or they don't exist, but they do.

Joe, the right?
OK, if you say so... However, they would be correct. They don't exist as a "right", constitutionally.

Joe the unions have broken numerous laws with these protests. As well as breaking their own contracts. See Joe when a liberal or a conservative breaks the law it's criminal either way. The unions are not above the law even though they cry "social justice" the law of the land is equal justice. When the union hold our kids and our economy hostage then they are the ones that are anti-American and anti-democracy. The people of Wisconsin voted for a man that said he would do what he is doing. If the unions hold us hostage then it is the right of the government to step in and limit the powers of those public unions. It is wrong that the teachers are telling us that if we don't give into their demandes they will not do the job they were paid to do without any recourse. Equal justice Joe, period. And if docotrs are writing scripts for sick days those doctors need to loose their licens. As far as I'm conserned the Democratic Party is acting anti-American and anti-democracy by not doing their job. And any teachers that are not doing their job in protest are in breach of contract and should be fired. You liberals can't just make up your own rules and expect there not be any legal retribution. The law is the law and contracts are to be honored or nulled and void. It's time to stop playing pussy foot with criminals and start bring down the anvil of the law down on them. We need to teach these bullies that they are not above the law.

Chris, well once again i want to see if you understand what your saying? Did he campaign on removing collective bargaining rights?

I've read numerous impartial discussions on that and nowhere have i been able to account for that.

You also realize that union leaders agreed to the concessions on Friday and the republican majority was made aware of it and could have gotten the bill passed if they removed the collective bargaining elimination section?

So the budget plan could be on its way and everyone back at home. The Republican majority leader said "NO".

So is this about budgets or is it about breaking the unions? I know where u stand, but you don't have a vote is Wisconsin.

Great comment Chris, how right you are.
It will be interesting to see, in the end, if the union members are 'rewarded' for their actions or 'held accountable'.

If the Tea Party didn't exisit and didn't have such a strong voice for reality in America I'd say the unions would be rewarded and taxpayer would continue to get screwed.