The mass killing of 12 people in Aurora CO has sent shockwaves throughout the country. Most of us here in America are calling it tragedy and senseless.
But that is where agreeance ends, politically speaking.

The rejuvenated Gun Control debate is now, once again, getting a full head of steam.
Liberal/Progressive calling for more tighter restriction and control of our 2nd amendment rights.
Conservatives/Libertarians calling for more conceal/carry laws in ALL 50 states.

News outlets, like ABC, jumping on the blame the Tea Party narrative, later retracting it.
Micheal "16oz soda ban" Bloomberg is screaming the loudest for gun control and hammer both Obama and Romney for ignore the liberal plea to do more, to strip away our rights.

So I've set out to pretty much ignore that issue.... for the time being.
What I would like to know is, Who is James Holmes?

Holmes grew up in San Diego, where he graduated from Westview High School in Rancho Penasquitos in 2006, according to San Diego 6 news.
Reuters' Stephanie Simon and Marty Graham reported that he "couldn't find a job after returning to San Diego several years ago. For a year or so, he worked part-time at a McDonald's, according to Tom Mai, who lives near the Holmes family in San Diego."

Holmes was a PhD candidate at the University of Colorado, Denver, studying neuroscience. The Wall Street Journal confirmed with a university spokeswoman: "Holmes had begun attending the neuroscience program in June 2011, but had decided to leave in June of this year, said the spokeswoman, Jacque Montgomery. 'He was in the process of withdrawing from the university,'

Police and reporters have made their way to his mother Arlene Holmes's house in the suburb of Torrey Highlands, where she confirmed her son had been involved. Holmes's father has left for Denver, NBC San Diego reports.


Neighbors in California said that Holmes moved to Colorado to attend graduate school after failing to find a job. They also said Holmes was unemployed and struggling to find work since his graduation from UC Riverside in 2010.

Law enforcement have confirm the weaponry Holmes used in the assult.

Police have reported that all the weaponry and body armor Holmes had in his possession tallied about $8000.
With the tripwire and canisters of explosives at his apartment, with any other things we, at this time, do not know about, it is most likely could have all cost right around the $10K mark.

Now what I would like to know is, how does an unemployed under-grad, with a grant, get the kind of money ($10,000) to carry out this massive assault?????

I hope law enforcement asks this question, because based on the picture below, his funding might have come from the folks who have organize the Occupy move.
Remember, a overwhelming majority of the Occupy movement participants were  unemployed and struggling to find work with degree's from colleges. He is also from San Diego.... facts that sure have similarities. 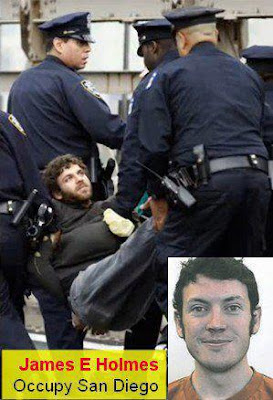 OH, and one more thing. Conceal/Carry, IS a good thing, in the right hands, as this 71 year old man demonstrates how to thwart a robbery.

I am struggling to buy a $500 hand gun, because I have other monthly oppligations like housing, car payment, taxes, etc.
Yet this guy acquires something I can't even dream of.

With the UN vote coming up and the past practices of Obama, I can only conclude our tax dollars are behind this!

My friend was in a different theater that night that had a sign on the door to disarm before entering. He complied as is the law. However, a non law-abiding perp could easily see the "opportunity" to attack helpless individuals in a dark, crowded theater. According to reports I heard there were 4 active duty military in the audience but apparently none were prepared for such an event. The bad guys will get their guns and use them... Why not allow the law-abiding citizen to defend himself and his family per the 2nd Amendment?

AP, coincidence or what, that this guy gets his hands on $8-$10G's to buy all this and ends up killing all these people, when the UN is negotiating the Small Arms treaty. Rumors are, Obama will sign it.
But he'll use THIS tragedy as an excuse for him to sign the treaty.

Agreed, Anon!!!
I take your friend didn't get hurt. Hope so.
Talking to my daughter about this, since she does work in a movie theater, she is wondering how this guy got in the back door. She said there is no way for someone to just walk in the back door, unless it was opened from the inside.

That link is to a post about U.N. Resolutions being passed/adopted without a vote. That's the perfect way to tie our hands with some U.N. krap and then we say oops after it's too late

I would say, Firebird, to hide what you have because Obama will sign that damn thing and it can go into effect without Senate approval, until they vote on it, which if Reid and his party hold on to the Senate, will never happen.
That is how they deal with circumventing the constitution.