National Debt: Is it Constitutional 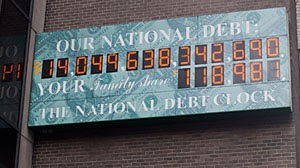 As we reach $15T in debt, and congress ponders raising the debt ceiling, I began to ponder the constitution and what it really says about the United States Government  HOLDING ANY kind of debt.
Article 1; Section 8

The Congress shall have Power To lay and collect Taxes, Duties, Imposts and Excises, to pay the Debts and provide for the common Defense and general Welfare of the United States

To borrow money on the credit of the United States.

Article 1; Sec 8 grants Congress the power to collect taxes… To pay the debt it incurs and to borrow money.
Now as I see it, Art 1; Sec 8 tells us that tax collection and borrowing money on the full faith of the US is allowable. But the taxes collected must be used to pay the debt, which also includes money borrowed, for that is also debt.
Next- 14th Amendment; Section 4

The validity of the public debt of the United States, authorized by law…shall not be questioned But neither the United States nor any State shall assume or pay any debt or obligation incurred in aid of insurrection or rebellion against the United States, or any claim for the loss or emancipation of any slave; but all such debts, obligations and claims shall be held illegal and void.

The 14th came about after the civil war and that the losing side cannot claim war retribution, nor can former slaves make claim on the US Government to pay them lost wages under their slavery.
So this doesn’t fit in to the question of whether the US Government can HOLD debt.
However, one could claim the the President could order the Secretary of the Treasury to continue selling bonds to fund the debt. By citing the Fourteenth Amendment, Obama could claim that Congress cannot constitutionally deny the payment of the public debt. Since the revenues are not enough to cover all the expenses in the federal budget, the White House would continue to raise funds to pay for the debt by selling Treasury securities.

But then again, Obama would be wrong for only Taxes, Duties, Imposts and Excises, can be used to pay the Debts.

Democrats see Art 1; Sec 8  two ways. The Government can tax to its hearts content and that the government responsibility to provide for the common defense is ignorant. The founding fathers rejected Kings George abuse of tax collection on them. But the Dems don’t use it to pay the debt, as required by the constitution. The Government borrows money, and uses it to pay some other debt.
The talks happening right now with regards to the US debt and it’s ceiling have hit a brick wall.
Republicans want to reverse spending and pay down the debt. The latter being in the Constitution.
Democrats are now claiming they want to pay down the debt also, but by laying and collect more Taxes and their 2nd demand is cutting military spending.
Democrats love the first part of Article 1; Section 8 “The Congress shall have Power To lay and collect Taxes” but ignore that taxes must (also) “provide for the common Defense “
It’s the US Government first and foremost responsibility to provide for the common defense and pay the debt from tax collection.
It cannot HOLD debt because it has no such power within the Constitution.


So there for, I will refer you to the 10 Amendment.

“The powers not delegated to the United States by the Constitution, nor prohibited by it to the States, are reserved to the States respectively, or to the people.”

That’s pretty much sums it up, in my opinion. Our nations debt IS un-constitutional.
Posted by Unknown at 8:38 PM

It's the repugs fault that our debt is so high! If they try and take away what we have earned there will be riots!

Not all true FYI. The following chart shows a little difference in your claim.
http://goo.gl/zrIZC
Now under Reagan and Bush Sr the public debt vs GDP doubled, from 31% to 62%, but when congress was taken over by Dems in, it shot up. Clinton came along with some stableness. But as of 1997 when congress was taken over by Rep it started to drop.
When Bush took office it went up from 55% to 62% until the dems took control of congress 2007, it then went from 62% to 100% (projected) under Obama. In little over 2 years debt almost doubled.

However, the point of this piece is whether it is constitutional for the Federal Government to HOLD debt.
IMO, it is not constitutional.

@FYI,
What planet have you been living on for the past 2.5 yrs?

Are you so sucked into liberalism that you really believe that any political party other than the Dems had 'control over' or 'responsibility for' this debt?

Please, please go out and create violence. Give this blog just that much more issues of liberal fueled violence, hate, and uncontrolled entitlement mentality to write about!

Liberals talk about corporate greed, but the greed of labor unions is way out of control!

No. It's not constitutional, but when has that ever stopped a politician?

You are correct, Silver. When has it ever. But I do see change on the horizon, as many Americans are becoming more in tuned with the Constitution then ever before.
You can thank Obama and Co. for that wake up call.