Watch Andrew Breitbart demand an apology from Congressmen Wiener and at the same time schools and challenges the MSM.

And then Wiener's lame ass excuse "Was meant as a joke to a woman in Seattle."
Yeah, right.
A week after claiming a hacker had posted a lewd photo to his Twitter account, U.S. Rep. Anthony Weiner on Monday apologized for lying about the ordeal and admitted carrying on inappropriate relationships with several women he’d met online.

Her majesty, Queen Pelosi :“I am calling for an Ethics Committee investigation to determine whether any official resources were used or any other violation of House rules occurred.”

Got news for Pelosi, she is no longer the Speaker... She just needs to shut up and sit down. The "Speaker" is to handle it. 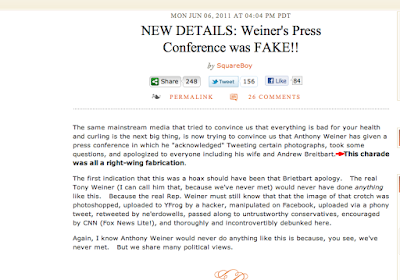 The loony left have LOST IT! LOL!
Is this conduct unbecoming a US congressmen?
Your thoughts.
Posted by Unknown at 7:01 PM

Isn't the techincal term for a Crying weiner called Gonorrhea?

Or it might be Wienerrhea. LOL!!
I think many are having issue with logging in to Google.
I don't have any issues with Safari, but I do with Explorer.

It gets crazier by the second, Mark.
The lefties will stop at nothing to protect their own.

Did you see Breitbart w/ Lauer on the Today Show this am.
Lauer was STILL trying to make it about Breitbart, painting him as the bad guy who exposed this scandal. AB once again schooled the lib nit wit.
It was fun to watch. I embedded just now.

No I didn't catch it, Bunni. I have got to see it though.
I love it when liberals heads explode to the point they become un-recognizable has human beings. LOL
I'll come and check it out. Can't wait.