The Internet has been rocking with rumors that if you drive down Interstate 35 near the town of Wyoming, Minnesota, you'll see a billboard showing the image of a smiling George W. Bush accompanied by the question "Miss me yet?" 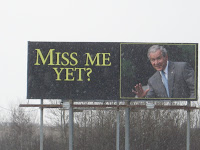 Many thought the picture was a hoax created through Photoshop and then posted on the internet. But now numerous people have confirmed its existence. The mystery surrounding the billboard quickly went from a fact or fiction story into being genuine.
Mary McNamara, the general manager at the Minneapolis office of Schubert & Hoey Outdoor Advertising, the company which owns and leases out the billboard space confirmed "The ad was purchased by a group of small business owners who wish to remain anonymous," McNamara said. However, McNamara did offer this political bombshell, according to AP: "Some of the people in the group who paid for this were Obama supporters."

Is it a bombshell? Or if you pay close attention to the quote 'WERE Obama supporters'. Probably not any more.

McNamara told the AP "some have even contacted her office offering to donate money to keep it up."
But of course the lefties in power are down playing this.
Cindy Erickson, the chairwoman of the Democratic Party in Chisago County, where the billboard is located, suspects the ad's funders are conservative activists posing as Obama supporters.

"I don't have any idea who did it, but my thought was that they're Tea Party people,"

Well Cindy, Tea Party people are NOT all conservatives. But of course the left has no clue what the Tea Party movement is all about, even when you explain it to them.

Erickson childish rant continues "I think most people have interpreted their message to be 'If you think it's bad now, don't forget how bad it used to be,'" she said. "It's just a goofy photo of him. It's goofy."

It's a full fledged slam at Obama.
Point to make. In a recent poll a few weeks ago, 44% of those polled wish Bush was back in office. Only 36% are glad he is gone.

I'd like to meet the group of business owners and shake their hand. True American Patriots.
Posted by Unknown at 5:31 PM