Last night, in the Vice-presidential debate, as it went, it was just an OK debate.
Both Biden, AKA  VP Joe Chuckles, and Paul Ryan made their points well.
Biden, with his vast foreign policy experience did pretty well on the subject, outside of the Libya fiasco.


Ryan hammered Biden with facts on the state of the economy, deficit, spending, and so on.


On that end of it, it was a dead heat… but that’s where it comes to an end.


Mr Chuckles, however, took it a few steps further, to the point of being an adolescent.
His laughs, smirks, frowning, figure pointing and “malarkey” comment showed one thing…
It was beneath the office of the Vice President to act in such a manner.
It, in my opinion, showed me he was not taking the seriousness of todays world.


Libya, Syria, Iran, 8%+ unemployment, $6T deficits, hijacking of private enterprise in Obamacare, dead ambassador, etc, etc, seemed to be a joke for him, and that Ryan new nothing of the facts (for which he did, extensively)


But by the end of the debate, one had to wonder what the people thought, for they are the ones who make the decision here….


And based on the CNN poll taken last night, Mr Chuckles didn’t help his re-election cause… See below… 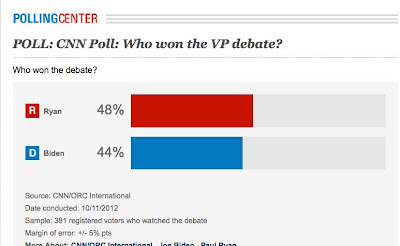 One last thing I noticed towards the end, Joe Biden was getting in to a debate.... with the moderator.... 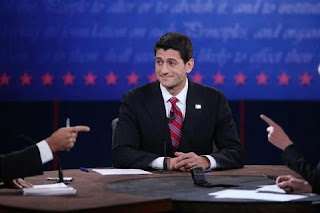 I am still scratching my head, on that maybe he forgot who he was supposed to debate!
Posted by Unknown at 1:12 PM

The left wanted red meat and they got it.... sadly for them, it was Biden who was wounded - not Ryan. Ryan showed class and respect - something sorely needed in today's political arena

Hell yeah class is sorely needed. Especially in the White House AND congress, too.
I think most voters are in agreeance in that manner.