In what could be the most obvious political maneuver to capture votes, today the Obama Whitehouse will  halt the deportation of as many as 800,000 young "illegal"  immigrants and in some cases give them work permits, in a sweeping new initiative announced by the Department of Homeland Security. 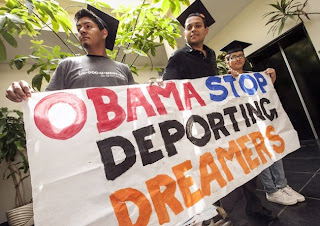 
People under 30 who entered the country illegally or overstayed their visas will be immune from deportation if they have not committed a significant misdemeanor or felony and have graduated from a U.S. high school or joined the military. They can apply for a renewable two-year work permit.


Homeland Security Secretary Janet Napolitano told reporters on Friday that she believed the move "is the right thing to do," and will help the agency focus on deporting criminals. Funny thing is, these people ARE criminals who entered the country ILLEGALLY or OVERSTAYED their visas.

"I wouldn't say we are encouraging people to step forward," an Obama administration flunky told reporters. "We are making a process available and people can make their own decision." (whether to be granted a pass for breaking our immigration laws).


Young people who were brought into the country illegally or overstayed their visas are better know as "Dreamers,". Does that word sound familiar? Like something we have heard out of Washington the last 2 years or so?
It should. The Dream Act passed the House nearly two years ago, but was blocked by Republicans in the Senate.
So, the Obama administration decided to bypass congress and enact it ANYWAYS.
Several times over the course of the past year, Obama has told Hispanic audiences who asked him why he did not issue an executive order halting deportations of some classes of immigrants that such a move would be legally impossible. "There are enough laws on the books by Congress that are very clear in terms of how we have to enforce our immigration system that for me to simply, through executive order, ignore those congressional mandates would not conform with my appropriate role as President."


But NOW as Obama see's his electability slipping away, his administration decides to just ignore what congress didn't do. Pass the dream act.


This is nothing but a ploy, along with the Justice Dept to sue Florida for "purging" the voters rolls of those who are unable to vote.

Even CNN calls in Politics!
Posted by Unknown at 1:02 PM