The fear was in the air, and most businesses in Downtown Chicago had told their employees to stay at home and work from there, because of the NATO summit and the trouble that was suspected.

So, here I am recapping what happened in and around the Magnificent Mile and the Windy City.


Pre- Summit: 3 Men were arrested Thursday and face terrorism charges after Chicago Police raid a Bridgeport apartment, that they suspected of preparing Molotov cocktails for the demonstration.
2 of the 3 men arrested are from Florida, the other from New Hampshire and their lawyer said they were only making beer.
Funny, this summit is only 2 days, the protests have only been happening a couple of days before and then scheduled during the summit. So if these men where only making beer, their lawyer should know that beer takes 3-4 weeks to ferment before you can consume it.....


May 18, 2012
First up, the Nurses Unions March, spewing Obama's Campaign talking points of 'Wall Street ruined our economy and big Corporations not paying their fair share', socialist propaganda, 99%, BS.
Based on the live feed I saw, there was about 200-300 people.... No biggy. 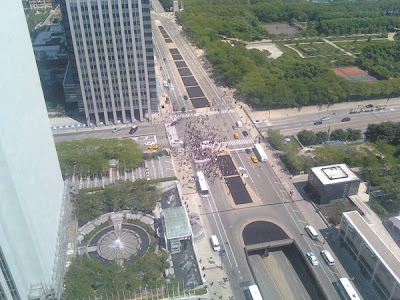 May 20th, 2012:
The busloads of anarchist, Socialist/Marxist/social democrats made their move and march from Grant Park to McCormick Place where numerous people were arrested. 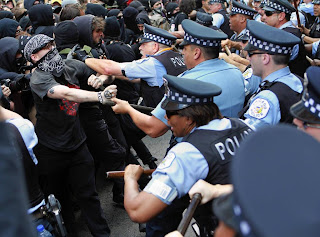 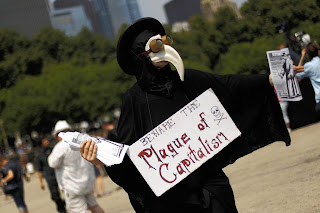 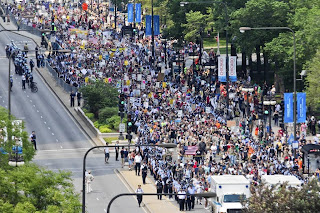 2:45PM
The City of Chicago website was hacked and brought down for a number of hours. Most likely from Adbusters. The Tribune reported that "A group using the name antis3curityops sent out a message on Twitter at 6:17 a.m. Sunday directing people to "fire" on chicagopolice.org and chicagosergeants.org."

5:14PM
Scores of riot Police were ordering protester to disperse. Many didn't.
Estimates put the force of the cops at 200-300 near McCormick Place, where the summit was held. Protesters that were left at McCormick Place was around 100-150. Clearly the Protesters were out numbered. Behind the first row of riot Police were Illinois State Police preparing their gas masks to dispense tear gas.

Police forcing protesters up against a building to squeeze them out.

Protesters were throwing gates at the cops.

Chicago Police got tough with the protesters and fisticuffs were thrown.

The Tribune called the results of this past weekends NATO summit by saying "Protests got rowdy but not wildly out of hand.". Sugarcoating the protests and the massive cost to all in the area.

This was a bad move on the Presidents part to host this thing here and no, it didn't get extreme, but the plan was in place to make it that way.
When will the liberal hacks in our government come to realize that hosting such events puts a serious damper on the rest of us to go about their lives without these Communist/Anarchist spewing their "Change" in our faces?

I'm sure the cop that got stabbed would think it got out of hand.... and I wonder if this rent-a-mob even knows what the letters N A T O stand for

O'Reilly had a show on last night naming the backers of the Occupy movement, hard leftist groups like SEIU and others headquartered in Washington DC are funded by Soros.

No longer a grass roots left movement (as Pelosi states)

Here is another incident in Chicago:
http://theconservativetreehouse.com/2012/05/21/follow-up-five-arrests-so-far-in-leftist-hate-group-chicago-restaurant-attack/

Great coverage Mark!
I'm glad I was off that week. Wouldn't want to be down in the thick of it with those lefty morons.

I really want to sight in my AR-15 on those anarchist, Bunni, but Chicago's finest had it under control. LOL!