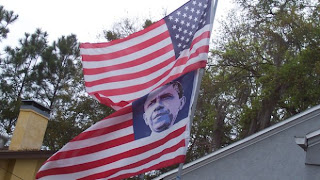 This was just reported on Fox News and thought this to be worthy of reporting.


An American flag with President Obama's image in place of the stars flew over a Florida county's Democrat headquarters long enough to enrage local veterans who called the altered banner "a disgrace."


Lake County Democratic Party officials took down the flag, which flew just below a standard Old Glory on the flagpole outside headquarters in Tavares following complaints by local veterans. But merely taking it down wasn't enough for several local veterans, who said they fought for the flag Betsy Ross made famous, not one with a politician on it.


It's absolutely disrespectful," Jim Bradford, a 71-year-old veteran who participated in the Bay of Pigs Invasion told FoxNews.com. "It's totally ridiculous. To put somebody's picture there, to me, it's a disgrace to do that."

So very true, but by late afternoon, Bradford and a number of other veterans delivered a copy of the federal flag code to Nancy Hurlbert, chairwoman of the Lake County Democratic Party. 4 USC Chapter 1, Section1, which reads:

The flag of the United States shall be thirteen horizontal stripes, alternate red and white; and the union of the flag shall be forty-eight stars, white in a blue field. (A Star shall be added for each new state entering the Union)

"We read that to her, but she would not accept that," Bradford said. "The discussion finally got a little bit heated."


Bradford said Hurlbert apologized for the incident, but did not offer any promises that it wouldn't fly again.


"It leads me to believe that it's not about the flag," she told FoxNews.com. "Certain elements cannot accept Barack Obama as president."

What in the hell does she mean by that? Is she REFERRING to race here? It appears so. Race, of course has NOTHING to do with it.

Hurlbert said she intends to contact an attorney regarding the matter and remained non-committal as to whether she'll fly the flag again.

Democrats have no respect for our country, let alone our flag.
Posted by Unknown at 1:33 PM

They should have ripped that rag down and burned it.

It is not an American flag, but like all liberal contrivances, a cheap imitation.

Love how Hurlbert goes all out to throw race in the mix, because she has nothing else to stand by this defacing.
I agree there, Kurt, Obama is a cheap imitation... of a President, too. :)