As reported on The City Square blog.

Obama held a fundraising event in the San Francisco bay areas Nob Hill Masonic Center and a Tea Party erupted.
Hundreds of Tea Party Patriots gathered to give Obama a Jan Brewer style tongue lashing over a verity of topics.

But most notable was the finger hands, that mimics Jan Brewers scolding of Obama on the tarmac in Arizona.

This protest was organized by the San Francisco Bay Area Patriots and supported by the North Bay Patriots (Marin County) and MyLiberty (San Mateo County).

With HHS and the Obama administration decision to stomp on the 1st amendment by requiring Catholics institutions to provide heathcare insurance policies that cover birth control and morning after pills to their employee's, (against their beliefs) even a catholic nun got in to the protest. (Note her checking her IPhone. Either she just got done taking a picture, or she is getting instructions from her pastor. 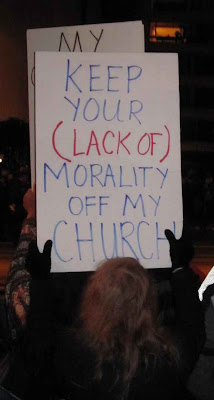 Of course it wouldn't be fair and balance not to note that pro Obama supporters did hold a counter-protest across the street..... 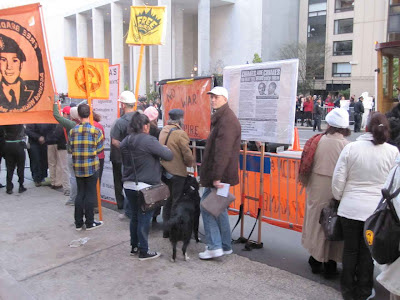 And they say the Tea Party is dead! HA. We're not going ANYWHERE!
(h/t to John for the pics)
Posted by Unknown at 8:57 AM

I was just as shocked too, Kurt. But this just proves that even conservatives can be found in the most liberal cities in America.