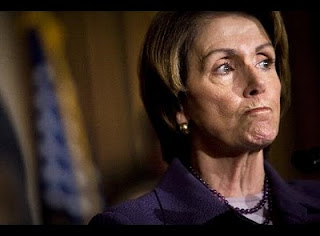 With Pelosi's not to surprising announcement that she will seek the leadership roll of her party in the House as minority leader, moderate Dems are saying 'Wait a minute, We might not follow that sinking ship, again'


In the wake of Speaker Nancy Pelosi's stunning announcement on Friday that she will seek to remain as leader of the diminished House Democrats, moderate members of the party are beginning to line up in opposition.
Rep. Joe Donnelly, D-Ind., said he was "disappointed that Speaker Pelosi is going to seek the position of Minority Leader."
North Carolina Rep. Larry Kissell's office said he hopes Pelosi "will change her mind and step aside."
Rep. Dan Boren of Oklahoma told Fox News that voters sent a message Tuesday that they want the Democratic Party to move in a new direction.
"They want someone to lead the party who is going to be bipartisan," he said. "This is very disappointing for a lot of us in the center."
Rep. Heath Shuler, of North Carolina, has said he might challenge Pelosi because the party needs a more moderate leader.
"I voted for everything she asked me to vote for," said Rep. Albio Sires, D-N.J. "You know, sometimes in this business it's difficult to know when to move on."
"With all the losses that we had with governors and all the redistricting that's going to be done, we don't need the target," Sires said
Posted by Unknown at 2:30 PM

The last quote is a very late realization.

But in all actuality it matters not who is a "leader" in congress be it the majority or minority but rather the policies they persue.

If Rep. Sires wishes not to be a target well that is simple to avoid, do not follow any "leader" and listen to your constituents.

Yes they are missing the point, Christopher. And that being listening to their constituents.
Thats is one of the top 5 reasons the House changed hands.
Hope they all got the message. But I am sure some of them STILL didn't.