If only Reno could see him now

If only Janet Reno could see Elian Gonzalez now. But wait, she can.


Ten years ago this month, the saga of a Cuban boy named Elian Gonzalez captivated the nation and much of the world. Elian, 6, was found floating on an inner tube off the coast of Florida, after his mother drowned trying to reach America.
The Cuban immigrant community in Florida embraced the boy as a symbol of the struggle of ordinary Cubans to flee the oppression of Fidel Castro's communist regime, and rallied behind the boy's extended family in Miami, which sought custody of young Elian.
But U.S. immigration officials and Janet Reno insisted that the boy be returned to his father in Havana. Agents of the Immigration and Naturalization Service conducted an armed raid on Elian's adoptive Miami home - yielding a powerful image of paramilitary forces in America menacing a frightened 6-year-old. Florida's Cuban immigrant community brandished that infamous photo as a reminder of what they considered American power effectively doing the bidding of a heartless Castro government.
A decade later, however, there are new photos of a nearly grown-up Elian Gonzalez - and they present a very different kind of propaganda image. 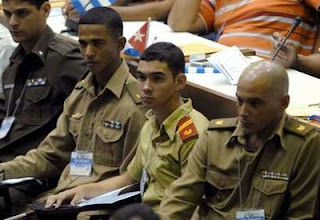 A Marxist propaganda Image.
Does he look happy?
Does he look like he really wants to be in Cuba?
Be force to wear the standard revolutionary military garb of Castro.
Is he thinking Janet Reno is a 'freaken bitch' and that she should be there instead of him and that 'I should have be able to stay in the United States'?

You decide!
I say OH Yeah.


These is a Cuban government released image.

But the American Thinker blog nails it with this:
"If Elian had been granted asylum, today he would be a teenager preparing to go to college with every opportunity for success ahead of him. Instead, on the cusp of adulthood, Elian poses for propaganda photos sandwiched between Cuban army soldiers attending the Union of Young Communists congress in Havana...The youthful Gonzalez should have been wrapped in the America flag. Instead a boy who once represented the quest for the God given right to be free, waves a Cuban flag symbolizing poverty, oppression, authoritarianism and misinformation."
Is this the future of America, not while I am still breathing.
Posted by Unknown at 7:56 PM