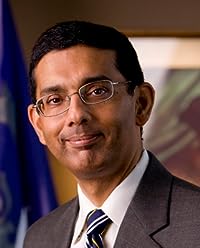 In response to the Associated Press's article that supposedly Fact Checks the 2016 Movie, Dinesh D'souza sets the record straight:

A few days ago the Associated Press ran a news article by reporter Beth Fouhy charging that my film “2016” contains serious factual errors. Remarkably, for a news article, the reporter didn’t bother to check with me or anyone else at the film. This was my first indication that something was deeply wrong with this article.


Let’s look at the specific charges raised in the AP article.

First, it claims that I “never mention the explosion of debt that occurred under Obama’s predecessor, Republican George Bush.” This is simply false. The film quotes former Comptroller David Walker saying that the national debt exploded under both George W. Bush and Barack Obama. The film shows a clear graphic depicting the actual debt increase under both presidents, so that the viewer can compare them. The simple truth is that Bush’s largest annual deficits were below $500 billion and Obama’s lowest annual deficit was above $1 trillion. So Bush was a big spender and Obama an even bigger spender. This is made crystal-clear in the film.

Second, the AP article quotes me as saying that Obama has “done nothing” to prevent Iran from getting nuclear bombs. This is a deliberate misquotation. Actually in the film I recall a prediction that I made in my book The Roots of Obama’s Rage. The prediction was that Obama “would do nothing significant” to prevent Iran from getting nuclear bombs. By omitting the word “significant,” AP can then claim that Obama has taken some measures, including some modest sanctions, against Iran. But my point is that these measures are so weak that they cannot be expected to–and in fact haven’t–deterred the mullahs in the slightest.

Third, the AP article “refutes” my contention that Obama is weirdly sympathetic to Muslim jihadis fighting against America by pointing out that Obama ordered the killing of Osama Bin Laden and has also approved drone strikes against Al Qaeda. My argument was based on the premise that Obama wants to close down Guantanamo and to extend constitutional rights to jihadis captured in Iraq and Afghanistan. I explained Obama’s peculiar position by saying that he views these jihadis as freedom fighters seeking to liberate their countries from American occupation. As Obama has made clear, he views Bin Laden and Al Qaeda quite differently, as international gangsters who go abroad to kill innocent people. So my argument about Obama is quite consistent with his actions against Bin Laden and Al Qaeda.

Fourth, the AP article claims that I misrepresent Obama’s position on the Falkland Islands. Not true. The British position on the Falklands is that the islands belong to the U.K. The Argentine position supports negotiations over the control of the islands. Despite the special relationship between America and Britain, and despite the fact that Republican and Democratic presidents have supported the British position, the Obama administration has switched sides and now supports the Argentine position calling for negotiations. This is reflected in resolutions passed by the Organization of American States and backed by the United States.

Finally the AP article disputes the film’s claim that Obama removed a Winston Churchill bust from the Oval Office. The AP article takes its cue from a White House blog that initially attempted to deny this and obfuscate the issue by claiming possession of a second bust. This second bust was supposedly under repair but has now mysteriously surfaced. But none of this changes the fact that one of Obama’s first actions as president was to return the Oval Office bust of Churchill. Obama didn’t just want to relocate it, he wanted it given back to Britain. That bust now sits in the home of the British ambassador. The film explains Obama’s hostility to Churchill by noting that he was a champion of colonialism and ordered a crackdown on an anti-colonial rebellion in Kenya in which Obama’s father and grandfather were both detained. So we know what Obama did, and we know why he might have wanted to do it. As for the original White House blog, the White House has admitted its inaccuracy and apologized.

So what’s going on here? Certainly it’s possible to debate the issues raised in the film. If AP wanted to commission a review or Oped article, that would be fine. But instead the news agency has published a crude and inaccurate attack masquerading as a news story. Evidently this fact-checking article required its own fact-checker.

Perhaps AP can now regain some credibility in this matter by publishing an apology.